Posted by: Evan Tice — Comments Off on Make More Money Writing With This Foolproof Strategy 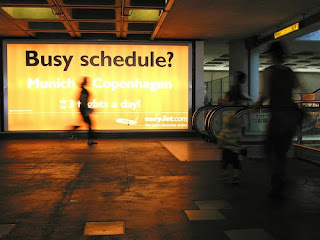 It’s the number-one question I get asked: “How can I make more money writing?” I’ve given a lot of answers in past posts, but today I’ll focus on one great technique any writer can use to up their income.

I learned this strategy back when I had my first business in the mid-1980s. I lived near a couple of the movie studios in Los Angeles, and I had a script-typing business.

I had a fee for typing scripts.

I had another fee for typing scripts in a big hurry. It was nearly double the regular fee.

Sometimes, screenwriters would come to me all disheveled and hung over and say, “Oh my God! This draft is due in two days, and I just finished it. Can you get it typed up tomorrow?”

Occasionally, they’d ask me to do it at the regular price. But I’d say no. It’s the rush price, take it or leave it. And they’d take it, every time.

Doing rush work at regular rates means you’re taking a client’s crisis and letting it become your crisis. Now you’re up working until midnight, and not earning anything more for the inconvenience.

Charge a premium, and you make more for your willingness to drop everything and tackle their project pronto. Now, their crisis is your opportunity to earn more. That’s how you should view it: your crisis is my opportunity.

It works the same way in freelance writing. People who plan badly are everywhere. They create emergencies. Suddenly, they need tons of writing done on a tight deadline!

That’s where you come in.

What’s the foolproof strategy for earning more money from writing? Put out the word that you specialize in rush jobs.

Let folks know you’ve got what it takes to crank out writing under the gun, and you’ll have a great new niche that raises your rates. Contact local marketing agencies and pitch yourself as a rush specialist. If you write for publications, be sure to let your editors know that if they ever have something that needs a quick turnaround, they can call you. If you have any background in filing same-day news stories, either in traditional news or for online blogs, mention it.

Once you get one rush gig, word will spread. People you’ve done rush work for often know other dysfunctional people or companies, and they pass along the word that you were their clutch player. Just a few rush jobs a year can make a big difference in your income.

I’ve had a couple of great rush projects in the past year. One is a white paper I just finished for a small employees’ union. They needed it done before contract negotiations so they could use it as a bargaining tool…but they dithered a lot about what it should say and took a lot of time getting organized. Then, they changed their mind a couple times, having me write different versions so they could compare them. I was charging $500 a page, and one of the versions was longer than our original bid, so I got to add that onto my fee.

One of my biggest rush-work assignments ever came last fall. I was approached by a major financial-services company. They’d decided their company Web site needed a very active blog they wanted to launch in just a couple of months. They wanted to create a stockpile of more than 150 short, reported blog entries, so they could put up several items daily. They’d spent too much time conceptualizing what they wanted, and now there was only six weeks left to launch!

They began by offering $200 a post. When I pointed out it was essentially a gigantic rush job, they immediately upped their rate to $300 per. At that rate, I agreed to get 20 posts done on their crazy deadline — pocketing an extra $2,000 because it was a rush. Their reaction? They were thrilled I took so many of the posts, meaning they wouldn’t have to find as many writers as they thought to work the project.

As it happens, I found the work utterly enjoyable and I had the time in my schedule to do it. But they still needed to pay me more for rush work, because rush work costs more.

Everybody knows that, which is what makes this strategy so easy to deploy. You really don’t have to explain to a prospect that their rush project will cost a premium. They get it.

I just in the past month signed up a client who is essentially a perpetual rush job. It’s a weekly trade publication where they need people who can react to news on Monday and file it by first thing Thursday, every week. They pay $1 a word.

You may not be busy when a rush job comes along. Maybe you don’t have a single other writing gig that week. But that doesn’t matter. The client doesn’t need to know that. They just need to know that rush jobs cost more…a fact they will usually accept without a blink.

Remember the famous work triangle — good, fast, cheap. Pick any two. You can’t get all three at once. You want good AND fast? It’s not going to be cheap.

By the same token, if it’s fast and cheap, it won’t be good, as I’d often point out to my script clients. To which those screenwriters would always reply, “Oh! But I need it to look really good.” And then they’d pay the upcharge.

What to charge for rush jobs

You deserve more for doing things on a rush basis. So if a prospective client comes to you with a rush project, remember to up your rates.

Charge 30 percent to 100 percent more, depending on how desperate the client seems, the size of the problem, how fast they want it, and the difficulty level of the assignment.

Rush jobs are a great niche, because you make more money, and you look like a hero for riding to the rescue of someone who was in dire straits on their project. Rush customers are often super-grateful, even though they paid a premium.

Have you taken any rush work lately? If so, did you charge more for it? Hope so! Tell us about your experience in the comments.