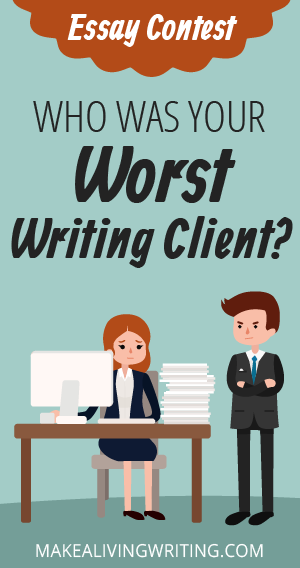 Ask any writer about their worst writing job — and they’ve got a story to tell.

If you’re a freelance writer for any length of time, some gig will go sideways on you. That’s just how it is.

The key is not to see that worst-case experience as an indicator of your skills, or a referendum on your future potential as a writer.

Because so many writers seem to be devastated when they bomb at a gig, I thought it might be useful to collect worst-client stories and let writers compare notes. I thought we could collect them in the comments on this post.

So I’m having a contest! Details are below. But first, I thought I’d kick this off by sharing my own worst writing job stories.

I’ve been at this so long, it’s hard for me to pick an all-time worst writing job. I’ve got five nominees — maybe you can tell me.

If you were thinking that seasoned writers never have writing jobs go bad, now you know. It happens to us all.

The contest: Tell us your worst writing job stories

Now that I’ve got you rolling, I want to hear your worst writing job stories. Here are the contest rules and prizes!

What can you win with your wretched tale of your most awful client ever? Here’s the lineup:

Grand prize: A 30-minute mentoring session with me and copies of ALL 9 of my currently available ebooks.

Runner up 1: A 30-minute coaching call with me plus all 4 Freelance Writers Den ebooks.

Good luck, everyone! And here’s to great clients to come.

I’m back to announce the winners of this contest. Thanks to all for some amazing stories, and great lessons in what NOT to do. 😉

Grand prize: Esther Copeland, for her horrifying tale of working 1.5 YEARS without pay and being stiffed to the tune of nearly $80,000.

Runner up: Samita Sarkar, who entered on my Facebook page, for her story of the client who turned into a stalker.

2nd Runner up: Lana, for her tale of the client that freaked out over how fast her great post was indexed on Google…and ended up winning a refund through her payment processor, despite all work being done to the client’s satisfaction.

P.S. If you’d like a lot better clients, you might want to check out the free training video featured below:

More Related Posts
Essay Contest: Tell Me About Your Most Hellish Freelance Writing Jobs
Lost Motivation for Writing? Tell Me Why to Win a Coaching Session
CONTEST: Win a Year in My Online Writing Community
More Related Posts