When to Walk Away From a Writing Job Offer 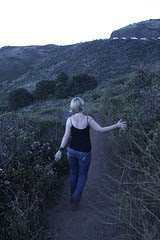 As a writer begins to market their writing, more work offers turn up. Because I’ve marketed the heck out of my writing business for about the past two years, I have a lot of work offers flowing my way.

But not all of the offers turn out to be wonderful. A recent writing-job nibble I had illustrates what can go wrong, and my criteria for when to walk away from a writing job offer.

The lure of a big project

I’ve had about a half-dozen different nibbles about ghosting a CEO’s book over the past year or so. None panned out before I had my eBook out. But since putting it out in September, I’m more hopeful this is going to work. An book assignment for a major business figure could easily be a $15,000-$20,000 project or more, and I love big projects.

So I was excited to hear from a contact who formerly worked with a company I’m connected with, which matches writers with executives who need a ghostwriter. Now, she told me, she was striking out on her own and might have a project for me.

I began by checking her out online. The company name didn’t Google at all, her phone was a cell, and her email (which didn’t end with her companyname.com) was set up to make you jump through a hoop to avoid being tagged as spam.

It didn’t seem very professional. Didn’t get a good feeling there. But she said she was just starting up. So I played along. After all…book! I was seeing big dollar signs.

Many weeks rolled by and she stayed in touch. Then one night I got an email from her. The project was now on the front burner. They were auditioning writers that week.

Could I please take a look at the rough draft she’d attached, and then rewrite a chapter of the book in the next 24 hours…for free?

Woah. That’s just so many different kinds of wrong, it stopped me in my tracks.

First off, most experienced writers I know don’t do auditions. You look at my clips, you hire me. They give you plenty of sense of what I can do.

Second, this CEO has had a book idea in a drawer for years, and now he’s going to decide who will help him turn it into the book that will make his reputation in one day? Sorry, but that just doesn’t compute.

Third, my contact forwarded me a copy of the CEO’s work without having me sign a nondisclosure agreement. She mentioned in the email that she’d like me not to disclose it…but at that point, having signed nothing, I could have reprinted his draft all over the Internet. She didn’t seem to know the legal side of the writing world.

Fourth, the ‘rough draft’ file she’d sent me wouldn’t load in my computer. My Mac thought it was in Excel 2004, which I no longer have. My husband tried it on his computer, and totally freaked. His computer thought it was malware. “Run now,” he says.

Finally, my contact said the CEO’s big worry was that he couldn’t find a writer who would be able to capture his tone and writing style. So now he’s going to audition writers without even having a 10-minute conversation with them, so they can hear how he talks?

If he really would do that, he doesn’t care how this book turns out. The whole thing had a bad smell to it. But…$20,000! I wanted that money. I wanted to figure out a way where doing this audition made sense.

When I’m presented with weird situations like this, I try to check in with my writer friends for a second opinion. (Yeah, my husband’s not a writer, so his opinion didn’t carry a lot of weight here. Sorry hon.)

In this case, I called Anne Wayman from About Freelance Writing, whom I’ve gotten to know putting on our 40 Ways to Market Your Writing Webinar recently. Her primary business is ghostwriting.

I ran it by her. She did not encourage me. As I suspected she would say, she told me she does not write entire chapters as a tryout. I agreed that it was too much work to do on spec. “Say you’ll write five pages as a sample,” she told me.

This was exactly what I’d been thinking I’d offer. Five pages is a decent-sized sample.

My contact was pressing me for a price quote too, on this draft I’d never seen and was supposed to write a whole chapter of in 24 hours flat.

I was basically relieved, since otherwise I was going to say no. Playing along with this “audition” would have likely wasted oodles of billable hours.

My husband’s assessment of the offer I think could be right: “Bet she’s going to ‘audition’ 20 writers, have them each write a different chapter, and get the book done free,” he says. He could be right about that, too.

When should you walk away from a writing job offer?

Have you walked away from a freelance writing offer recently?

Leave a comment below and tell us your story.